What got me snipped from wattsupwiththat.com - 6

This time a comment of mine, which I had submitted on January, 24, 2013, in reply to the posting "Burt Rutan: 'This says it all and clear'" got vanished or never appeared at Anthony Watts's blog "Watts Up With That?". My reply listed some major flaws of the posting. It is one of the many examples how fake skeptics lie using cherry picked data and flawed statistics. I addressed this pseudo-scientific approach also in the post "How to create a false 'global warming standstill'".

1. Cherry picking of data intervals and the data set to support the desired message.

2. Drawing scientifically invalid conclusions from changes in limited data, which are not statistically significant.

3. Straw man argumentation, where something is being "refuted" that is not being stated (as if any climate scientist has claimed that CO2 was the only factor influencing the global atmospheric or surface temperature record, and that there was a linear relationship between CO2 emission or CO2 mixing ratio in the atmosphere and observed temperature record).

But the crowd here is generally applauding. So much for the skepticism of "skeptics".

I don't know for what purpose Mr. Watts posted this. But if the purpose has been to expose what I am seeing here, it is a full success.

How to create a false "global warming standstill"

I have done this exercise for the RSS data of the lower troposphere temperature. And voila! There has not been just one global warming "standstill". There has been even two over the last 34 years, I have discovered using the woodfortrees tool. 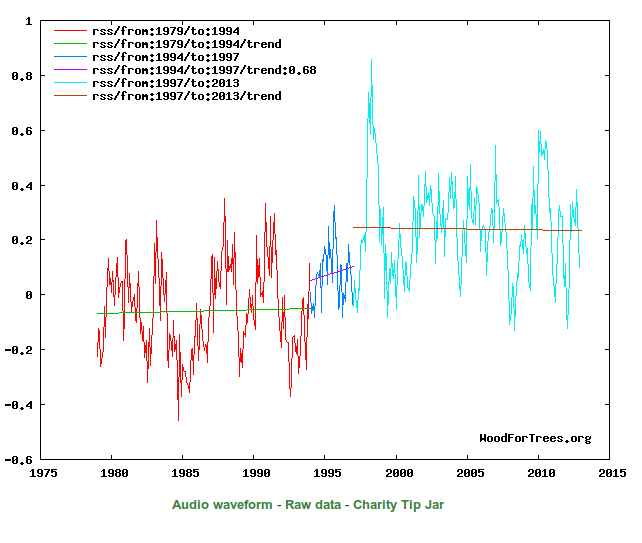 According to this, the first "global warming standstill" occurred from 1979 to 1993 (inclusive). The statistical estimate (using this neat trend calculator at the Skeptical Science blog, which is based on [1]) of the trend is 0.012 Kelvin/Decade. The 2-sigma (about 95%) confidence interval is +/-0.229 Kelvin/Decade. As one can see, it is quite large. Then there is the recent "global cooling" from 1997 to today with a trend of (-0.003+/-0.229) Kelvin/Decade. No statistically significant cooling, but what "skeptic" is going to care about that, as long as "cooling" can be claimed.

What now? Now we repeat the statistical trend estimate for the whole time interval from 1979 to today: 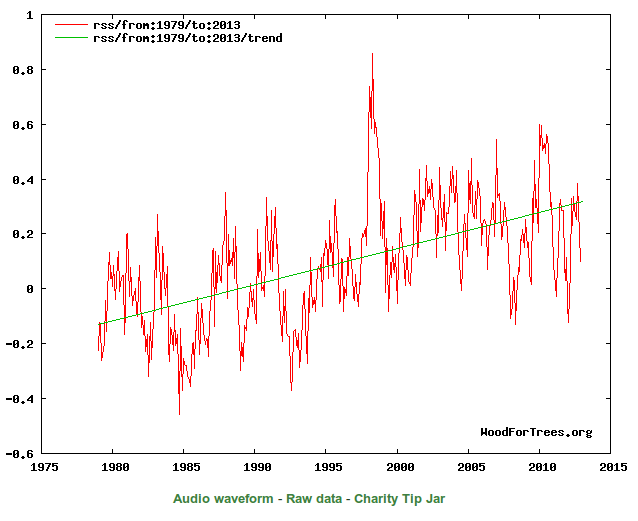 The statistical estimate for the trend over the whole time interval is (0.133+/-0.073) Kelvin/Decade. There is a clear global warming trend, which is statistically significantly different from a Zero-trend by more than 3-sigma, which means that the probability to have a false positive signal relative to the noise in the data within the time interval is less than three out of a thousand.