-----
I just have tested the new approach, announced in April by Anthony Watts who is host of the blog, to the treatment of comments at wattsupwiththat.com, to see whether anything has changed for me. I commented on an article with the title "No significant warming for 17 years 4 months" by the notorious Christopher Monckton. Well, I tried. This is the result: 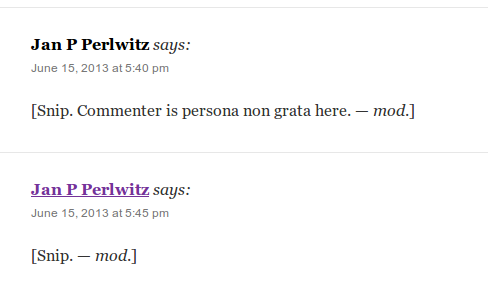 Thus, the only change for me is that me being banned is official now. They want to be more among themselves, without being too much interrupted by someone informed rebutting their pseudo-science. It is like with a cult. This is Anthony Watts' big change. I am certainly not the first one who actually works in the field of climate science and who got declared persona non grata over there. I feel honored.

Here is what I had submitted in reply to Monckton's article:

----- snip -----
Anthony Watts seems to think this article posted under the title "No significant warming for 17 years 4 months", written by Christopher Monckton has an important message to deliver to have it put as sticky first post on his blog for a number of days. But with closer examination, it is only the x-th repetition and variation of the "skeptic" talking point about the "global warming stop/pause" or "no warming", observed allegedly for x-number of years (the x varies according to convenience).

Mr. Monckton asserts in his article right away in the first paragraph, that "there has been no global warming statistically distinguishable from zero for getting on for two decades."

Now we are already up from 17 years and 4 months to alleged "two decades", which would make it 20 years, for which there hadn't been any warming that was statistically distinguishable from Zero, according to Mr. Monckton. Why not boldly claim "two decades", if he is at it, right?

On what does Mr. Monckton base his assertion about the alleged lack of warming for > 17 years? He bases this assertion on the fact that the temperature trend in the HadCRUT4 data set does not exceed the 95% statistical significance threshold. As correct this fact is, technically, it's also the point where Mr. Monckton misleads the audience. He equalizes a temperature trend, which does not pass the 95% significance threshold when a statistical test is done with "no warming" at all. And this is just jumping to conclusions.

Let's examine the trend since the start of 1996. There is a tool at the Skeptical Science blog, with which this can be done for the major temperature data sets: http://www.skepticalscience.com/trend.php

HadCRUT4 shows a trend with a 2*sigma (=2*standard deviation, which is equal to about 95% statistical significance threshold) of 0.089+/-0.118 Kelvin/decade. Does this mean this warming is not distinguishable from Zero, generally, because the trend was smaller than 2 sigma? No, it does not necessarily mean that, because it is still possible that the trend exceeds a lower significance threshold.

So, let's check that. The trend of 0.089 in the HadCRUT4 data since the start of 1996 equals to about 1.51*sigma. The 80% threshold of statistical significance is about 1.28*sigma. Thus, even though the 95% threshold has not been exceeded (yet) since the start of 1996, one can distinguish the temperature trend in HadCRUT4 from Zero with more than 80% statistical significance. The probability to err is less than 20%. The other data sets, except for RSS that deviates to the cold side, show similar or higher warming trends since 1996, compared to HadCRUT4 (e.g., Spencer and Christy's UAH data: 0.12+/-0.2 Kelvin/decade). The satellite retrieved data have larger 2 sigma intervals, though. There is a larger interannual variability in the troposphere temperature data compared to the surface temperature data.

BTW: Even if the temperature trend was not statistically significant even at 1 sigma, this would not allow the conclusion that there was "a global warming stop/pause", since non-detectability of a trend in a time series, which is composed of trend and fluctuations is not sufficient to conclude absence of the trend in the time series. This is particularly true in this case, since there is a multi-decadal warming trend going back to the mid 70s, which is statistically significant with more than eight sigma in the surface temperature records.

Another point would be that the atmosphere is one thing, and not the major component regarding global warming. The oceans have continued to warm in the time period during which global warming allegedly has "stopped/paused". About 90% of the additional energy from the radiative perturbation due to increasing greenhouse gases in the atmosphere goes in the ocean. The ocean releases a part of this accumulated energy into the atmosphere over time. This energy release is not a linear process. A large part of this energy is released during El Ninos. And the ice caps at both poles of the planet (that includes the glaciers) have continued to melt. No one should have missed the melting trend of the Arctic sea ice, which has even accelerated over the last decade. These are strong indicators that global warming has continued also in recent years, contrary to what "skeptics" want to make believe.

In summary, Mr. Monckton's assertion of "no warming" for > 17 or even 20 years is false. It does not have any scientific validity, because it is not based on empirical, statistical evidence. And it ignores other indicators for global warming than the tropospheric/surface temperature trends.

Another assertion by Mr. Monckton is about something he calls "Dr. Santer's 17-year test", according to which "models may have failed", because the temperature trend hadn't exceeded the 95% threshold. Now, one could expect that Mr. Monckton provides some proof of source for this assertion about such a test, allegedly stated by Ben Santer. However, the link he provides leads only to another article in this opinion blog here, which was obviously not written by Ben Santer. So, is it the link to the one press release in the other article?
https://www.llnl.gov/news/newsreleases/2011/Nov/NR-11-11-03.html

The press release states something that refers to 17 years. It states:

"In fingerprinting, we analyze longer, multi-decadal temperature records, and we beat down the large year-to-year temperature variability caused by purely natural phenomena (like El NiÃ'Â±os and La NiÃ'Â±as). This makes it easier to identify a slowly-emerging signal arising from gradual, human-caused changes in atmospheric levels of greenhouse gases," Santer said.

The LLNL-led research shows that climate models can and do simulate short, 10- to 12-year "hiatus periods" with minimal warming, even when the models are run with historical increases in greenhouse gases and sulfate aerosol particles. They find that tropospheric temperature records must be at least 17 years long to discriminate between internal climate noise and the signal of human-caused changes in the chemical composition of the atmosphere.

The talk in the press release is about the fingerprinting method applied by Santer. Regarding this method, it is said that one needs at least 17 years of observed tropospheric temperature data to detect the human-caused warming signal. However, there is no statement whatsoever in the press release according to which a lack of 95% statistical significance for more than 17 years meant that the model had "failed".

Also, I seem to have a different understanding of the English language compared to many "skeptics", because, in my world, "at least" marks a lower boundary, whereas many "skeptics" seem to think that "at least" has equal meaning to "at most".

As for Mr. Monckton's assertion about the alleged IPCC predictions regarding the temperature increase since 2005. Mr. Monckton writes:

It is better to focus on the ever-widening discrepancy between predicted and observed warming rates. The IPCC’s forthcoming Fifth Assessment Report backcasts the interval of 34 models’ global warming projections to 2005, since when the world should have been warming at a rate equivalent to 2.33 Cº/century. Instead, it has been cooling at a rate equivalent to a statistically-insignificant 0.87 Cº/century:


Mr. Monckton asserts here that the IPCC had predicted the temperature would nearly linearly increase by 0.0233 Kelvin/year since 2005, and because the temperature in the real world had behaved differently, the model predictions were wrong. I can't call this claim by Mr. Monckton anything else than absurd nonsense. Mr. Monckton just takes the model ensemble average calculated from many individual model simulations and interprets this as a prediction of how the temperature will behave in the real world. Of course, the ensemble mean does not show the same variability as the temperature in Nature, because it's a mean! Nature only provides one single realization of all possible realizations for the same boundary conditions in a chaotic system. Each individual model simulation is like a single possible realization. It is nowhere predicted by anyone that the one single realization from Nature would follow the model ensemble mean from year to year, or even from decade to decade. A proper comparison, for instance, would be to take the full range of all model simulations, among which, BTW, there are some that actually show a "cooling" over the same time period as well, obtain the 95% range spanned by the model simulations, and then see whether the observed temperature record lies within this range, or marches outside of the range. Mr. Monckton has not done that. According to the real Figure 11.33a in the leaked draft of the AR5 report, the observed global mean surface temperature still lies within the range of the model simulations, although near the lower end.
----- snip -----