The Institute of Policy Studies (IPS) is a Washington, DC, based progressive political think tank. According to its self-description:

"IPS is a community of public scholars and organizers linking peace, justice, and the environment in the U.S. and globally. We work with social movements to promote true democracy and challenge concentrated wealth, corporate influence, and military power."
(http://www.ips-dc.org/about)

Thus, they are not an academic research institution. They are an advocacy group with a political mission. Like the conservative Heartland Institute or the Heritage Foundation, but from another side of the political spectrum.

Experts from various fields, relevant for the political mission of IPS support the IPS as "Associate Fellows":

"Associate Fellows are scholars who share their expertise with IPS through one of the institute's projects or program areas. IPS Associate Fellows represent some of the country's leading progressive leaders in a variety of areas from inequality, climate justice, foreign policy, and many others. Most work on a volunteer basis unless dedicated funds are raised for their work. Associate Fellows are invited or sponsored by an IPS project director to collaborate with the institute for one-year, renewable terms."
(http://www.ips-dc.org/about/assoc_fellows)

Caleb S. Rossiter, Adjunct Professor with the School of International Service of American University, teaches "courses on African history and politics, U.S. foreign policy and research methods (with a focus on the use and misuse of statistics and models in the climate change debate)" according to his self-description. Obviously he does not work in climate research, he is not an academic expert on climate science. He is a layman in this field. Caleb Rossiter was one of the IPS's Associate Fellows. Until about a month ago.

Caleb S. Rossiter published an article in the Wall Street Journal on May 5, 2014, where he publicly expressed views on economical and political strategies, which apparently do not agree with the ones of IPS, combined with some ignorant claims about climate science, climate modeling, and climate change. Two days later, IPS decided to cut its ties with Caleb Rossiter. They do not want him as Associate Fellow anymore, because his and their views were not compatible anymore (Screen shot of email as published at Climate Depot): 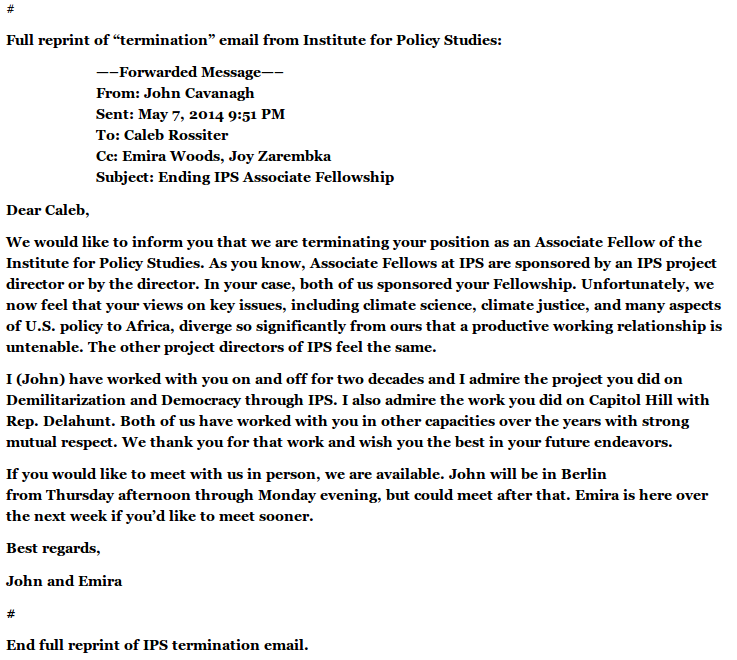 The article in the Wall Street Journal may have been the point where IPS drew the line. However, when I saw Rossiter's rhetoric at his "Climate Change" blog, e.g., against the scientific knowledge presented in the reports of the IPCC, which are written by leading international experts on climate science who work and publish in the field (not by governments, contrary to what Rossiter claims), his conspiracy ideation about the IPCC, or his baseless attack against renowned climate scientist James Hansen, former director of the NASA Goddard Institute for Space Studies, he likely had it coming for a little bit longer already. I also wonder why Rossiter, with his contrary views, would even want to work with a think tank like the IPS.

Considering the facts above, one could think not much has really happened. A collaborative relationship between a political advocacy group and an individual has been dissolved due to political incompatibility. It happens. Like divorce of a marriage because of sexual incompatibility. Something that is not really worth it on which to spend much time in the news.

Caleb S. Rossiter seems to display himself in this affair as a victim of evil censorship, though, according to Climate Depot:

"If people ever say that fears of censorship for ‘climate change’ views are overblown, have them take a look at this: Just two days after I published a piece in the Wall Street Journal calling for Africa to be allowed the ‘all of the above’ energy strategy we have in the U.S., the Institute for Policy Studies terminated my 23-year relationship with them…because my analysis and theirs ‘diverge.’"

This is just ridiculous. Is he prevented from speaking out freely anywhere, because IPS does not want to work with him anymore? Certainly not. It is like a guy is complaining about censorship, because his girlfriend dumped him. One thing does not have anything to do with the other one.

Equally ridiculous is the spin in the AGW denier blogosphere. There, the affair is displayed as a case of "Climate McCarthyism", like in an article by James Delingpole on the right wing Internet news outlet Breitbart, followed by more than 2400 comments, still counting, largely filled with whining and ranting by the conservative audience about "oppression of free speech", "liberal tyranny", and other absurdities, which may be a good basis for some psychological case studies about the mindset of many conservatives, e.g., to what degree this mindset is governed by absurd conspiracy fantasies or psychological mechanisms like projection.

Now, pretending to take all these crocodile tears seriously for a moment, which are displayed at Breitbart, regarding the allegedly oppressed free speech and the alleged lack of tolerance, one would have to conclude it would be logical then to welcome a climate scientist who has some knowledge on climate topics, even if his informed views counter the views of most of the audience at Breitbart News Network. Reality, as one really should expect, looks quite differently, though: 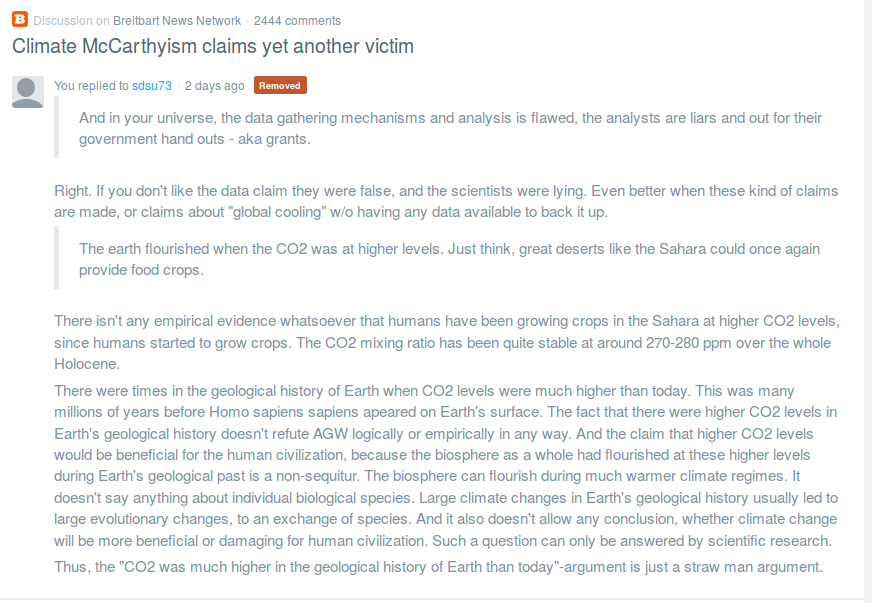 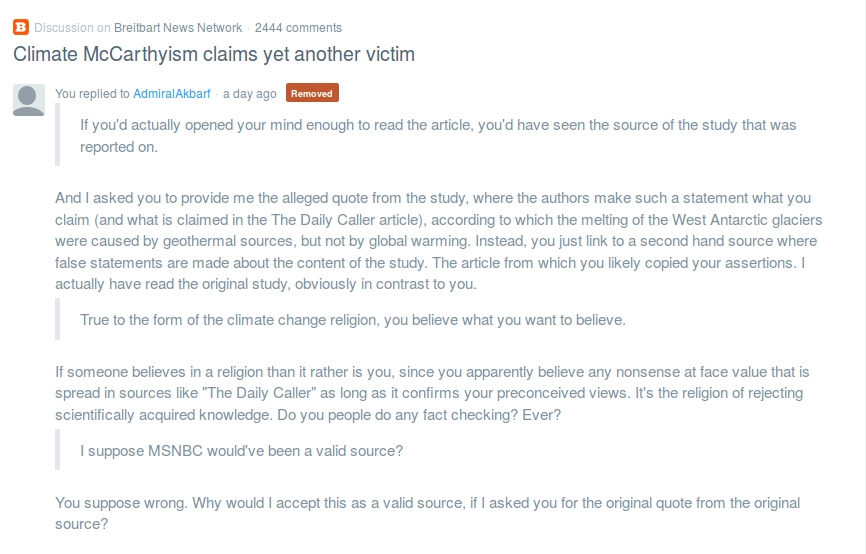 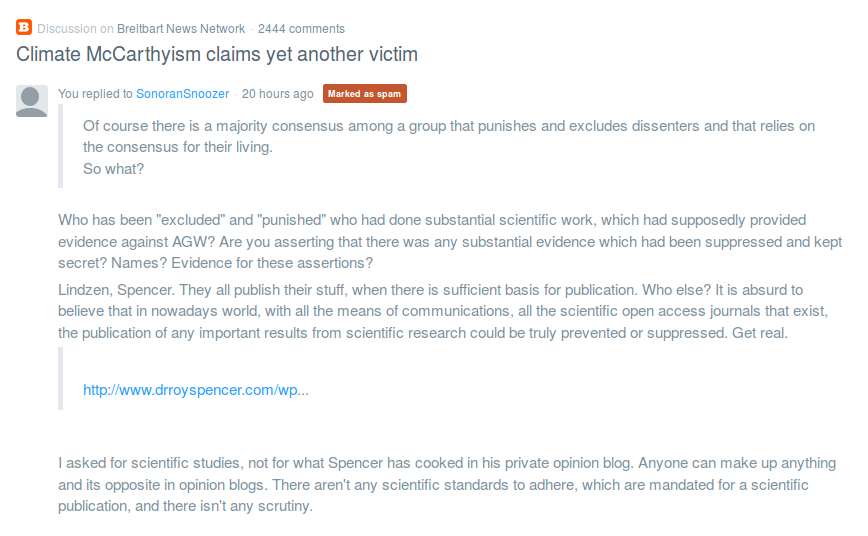 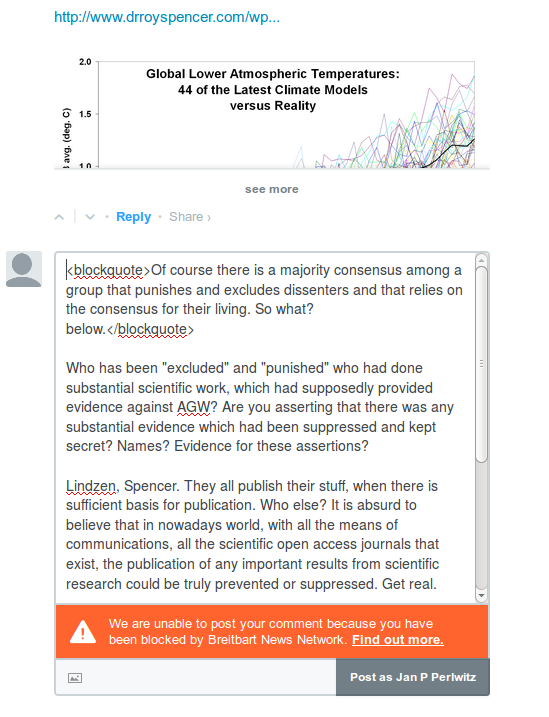 What Irony. As much for free speech and tolerance on the side of conservatives and AGW deniers, once more, regarding views that are not in agreement with their party line, even if these views are coming from someone who is informed. It is the same pattern again and again. Many conservatives, including their opinion outlets, seem to be afraid of informed dissent, facts, and science.