A comment on "The crucifixion of Dr. Willie Soon" at Breitbart

There is an article by Joseph L. Bast, president of The Heartland Institute, and the lawyer and alleged pro-freedom of speech fighter Joseph A. Morris at Breitbart with the title "The Crucifixion of Dr. Willie Soon". I am banned from commenting at this outlet of the defenders of free speech. Thus, I am going to put my comment here.

Since Bast and Morris link in their article to one of my comments. The assertion by them that I hadn't read or understood the paper by Monckton, Soon, Legates, and Briggs before I criticized it is false. The comment by me to which they link doesn't support their assertion. Although, there are some points in the paper that are difficult to understand on scientific grounds. For instance, how anything follows for the real climate system from the doing of process engineers who wanted to prevent oscillations in electronic circuits, i.e., positive feedbacks leading to instabilities (see also here). That such nonsense and other fatal flaws in the paper could pass the peer-review process is only explainable to me with a breakdown of the peer-review process at Science Bulletin, the Chinese journal where the paper was published.

Scientists have commented on the paper how scientists do. They have seen fatal flaws in it regarding the quality of the science and pointed it out (e.g., here, here, and here). They did not attack the authors, personally. Bast and Morris, in contrast, seem to think that a paper should be judged according to whether they like the economical, political, or ideological implications. This is not how science is supposed to work, though.

After linking to criticism by scientists on the Monckton et al.-paper, Bast and Morris write, "Having failed to refute the article, environmentalists turned to smearing the authors." By linking the criticism by the scientists with this alleged "smearing", they suggest that it was those scientists who turned to "smearing". Do Bast and Morris have any evidence for this? For my part, I reject any such suggestion by Bast and Morris and consider this as smearing coming from them. To make it clear, I do not support any petition for dismissal of Soon for what he has published in scientific journals, even if it is bad science. That would go against my understanding of freedom of science. Demands by the public for disclosure of funding sources and conflicts of interests are legitimate, though. In the case that Soon has committed any ethics violations it is up to his employer to investigate this and deal with this according to the institution's policies, if there is any initial evidence for it. I do not take any word by Soon, Monckton, Briggs, Bast, or Morris regarding this issue at face value.

Also, it is hilarious that Bast and Morris, these two defenders of Soon's free speech, link to the article by Monckton at Climate Depot (which, BTW, is just filled with more misrepresentation, strawman arguments, non-sequitur, and failure to understand the physics of the climate system), where Monckton demands the dismissal from their employment and the criminal prosecution of those scientists who dared to criticize the flawed science in the Monckton et al. paper. And they don't say any word about Monckton's demands.

So far for my comment. And to reconfirm that the state at Breitbart is still the same: 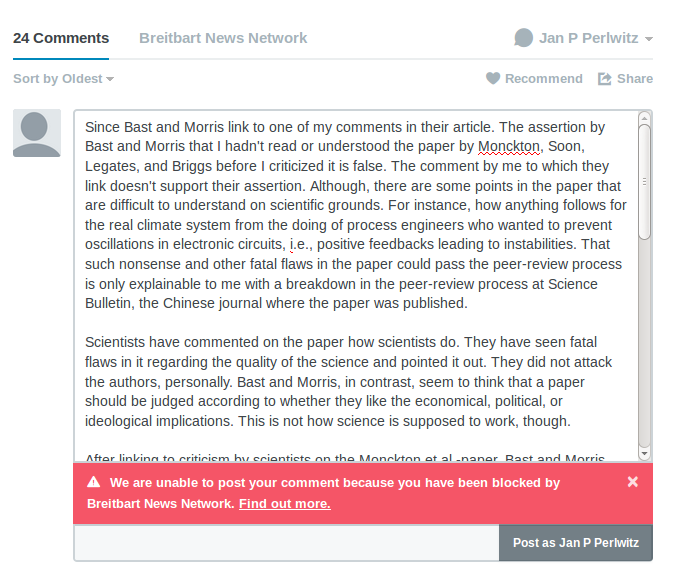