Is there evidence for a statistically significant trend change in the global surface temperature data?

Update: When one starts the trend analysis in 1999, using the the same tools as below, it takes the year 1998 with the strong El Nino out of the picture. Both the year 1999 and 2000 were years with La Nina present. One still gets some weak/medium statistical significance for the difference between the trends from 1975 to present and from 1999 to present.

Just to clarify. This has nothing to do with the denier talking point about a "global warming stop" or similar. Global warming has not stopped as one can see from the continuing increase in the ocean heat content also in recent years (the acceleration in the melting of the Arctic sea ice is another indicator): 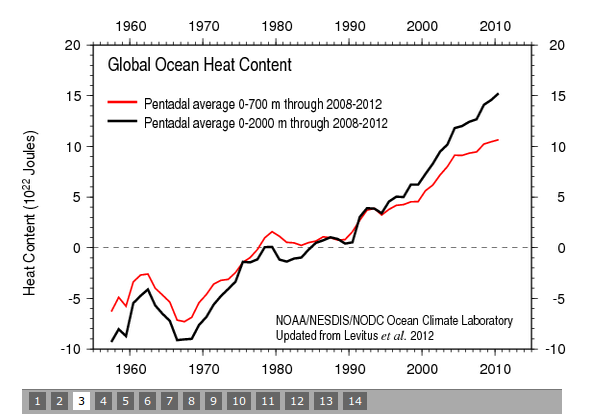 It has more to do with how the additional energy available from the radiative perturbation from increasing greenhouse gases in the atmosphere is redistributed in the Earth system. There may be years, when the fraction of this energy that heats the deeper layers of the oceans increases at the expense of the fraction that heats the atmosphere. This may have been the case in the recent decade, and it could last a few more years. Some recent research supports this possibility (see Meehl et al., Journal of Climate (2013), doi: 10.1175/JCLI-D-12-00548.1).

Update: I have asked the question below also at Tamino's blog "Open Mind". He gave an interesting answer, pointing me to another post by him, according to which cherry-picking of a start year, which I exactly did by choosing 1998, actually changes the results from the statistical significance test and requires much higher t-values to be exceeded to make the result statistically significant. Keep this in mind, when doing such a thing. I learn something new every day.

These are the trends and 2 sigmas in K/decade for the two time periods. The statistical Null-hypothesis is that there has been no change of the trends since 1975.


This may be all just a statistical artifact due to the cherry picked start year of 1998 and the very strong El Nino in that year, the prevalence of La Ninas in recent years, and the deeper and prolonged solar minimum of cycle 23. The statistical significance may go away again with the adding of the data from coming years. Even a 95% significance level still allows for one false rejection of the Null-hypothesis out of 20. However, with these numbers I do not feel comfortable to reject that some empirical, statistical evidence for a significant trend change toward a lower warming trend in recent years has emerged. Those numbers actually indicate a quite high probability for such a change.

It is not inconsistent with the somewhat smaller increase in the ocean heat content (OHC) in the upper 700 m over the last decade compared to the decades before. http://www.nodc.noaa.gov/OC5/3M_HEAT_CONTENT/

It may be worth to check whether the smaller slope of the 700 m OHC in recent years is statistically significantly different from the slope in the decades before.

Any opinions on those numbers and what conclusions can be drawn from it?
Posted by Unknown at 5:06 AM