The story of my visit at Bob Tisdale's blog "Climate Observations"

Bob Tisdale is a little bit a strange fellow. He has a very odd belief that global warming, including the one of the oceans is caused by the El Nino-La Nina (or ENSO - El Nino Southern Oscillation) cycle. El Nino is characterized by a strong ocean heat and sea surface temperature anomaly in the Central and Eastern equatorial Pacific ocean. La Nina is the counterpart, characterized by a negative heat and sea surface temperature anomaly. The equatorial Pacific produces El Ninos and La Ninas every few years, with global reach through the atmospheric circulation, leading to temperature and precipitation anomalies even in remote regions of the planet, mediated through so called teleconnections. Sometimes warm or cold phases occurs in a row only interrupted by neutral conditions. It is a major mode of internal chaotic variability in the ocean-atmosphere system. Bob Tisdale understands as much. However, he does not seem to understand that El Nino-La Nina cannot generate by itself a global ocean warming trend, because the ocean does not heat itself. A net influx of energy into the oceans is needed to cause a secular warming trend of the whole body of ocean water. The energy must come from somewhere. Bob Tisdale cannot explain where it comes from. The axiom here is, like for all the AGW-"skeptics", global (ocean) warming cannot, never ever, be caused by the radiation effect of increasing anthropogenic greenhouse gases. All the arguments are built around this axiom.


This figure (added to the post after original posting) shows the increase in the ocean heat content since 1955, for which needs to be explained what the energy source for all the heating of the   oceans is: 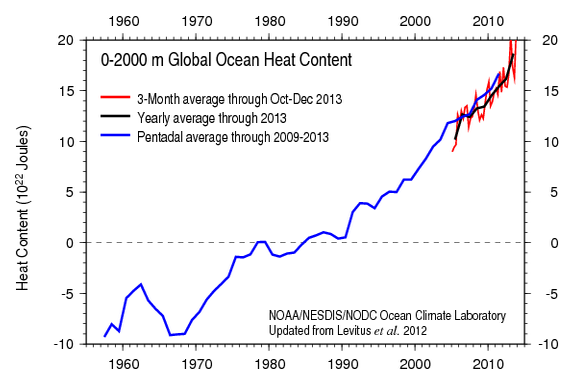 I paid a visit at Bob Tisdale's blog, because I accidentally had seen that he had written and published on his blog an open letter to Daily Show host Jon Stewart who had made fun of AGW-denialism (here and here). After introducing himself, what an important personality he was, in the AGW-denial blogosphere, who even publishes at such an important blog as wattsupwiththat, Bob Tisdale explained to Jon Stewart how utterly wrong established climate science was regarding anthropogenic global warming.

Well, I had had the impression before that Bob Tisdale was someone among the AGW-"skeptics" with whom one at least could talk and who is able to maintain civility, damn was I wrong. What a bully and jerk, filled with delusions of grandeur, and at the same time with the need of getting reassured from his comrades. He very quickly started to show the usual reaction of fake skeptics, when they are losing the argument. He resorted to ad hominem attacks and other evasion tactics. Apparently, when he felt that the lack of physical soundness in his "theory" was pointed out too much and confronted with the inconvenient reality of empirical data, it turned out he is just another one who can't take it when he is being contradicted: