The topic probably seems to be out of place a bit for the ones who live in the Northern Hemisphere, considering the current summer weather outside in many places of it. However, I still have seen it popping up as talking point presented by AGW-"skeptics" at various places. The following quote is exemplary:

"The last U.S. winter colder than this one was in 1911/12, before the First World War.
Thank you, America! Most of Britain has had an unusually mild and wet winter, for you have had more than your fair share of the Northern Hemisphere’s cold weather this season.
Global warming? What global warming?"
(Christopher Monckton of Brenchley, March 26, 2014, http://wattsupwiththat.com/2014/03/26/coldest-u-s-winter-in-a-century/)

What global warming? Apparently, it is being suggested that the surface temperatures of the winter 2013/14 were about the same as about 100 years ago, and this would refute global warming. Leaving aside for the moment that it already is scientifically not justified to take the weather pattern of a single season to draw conclusions about the longer-term climate trend, here is the global temperature anomaly and its geographical distribution for the winter (December, January, February) 2013/14 relative to the average winter of the reference period 1951-1980, based on the NASA GISS surface temperature analysis: 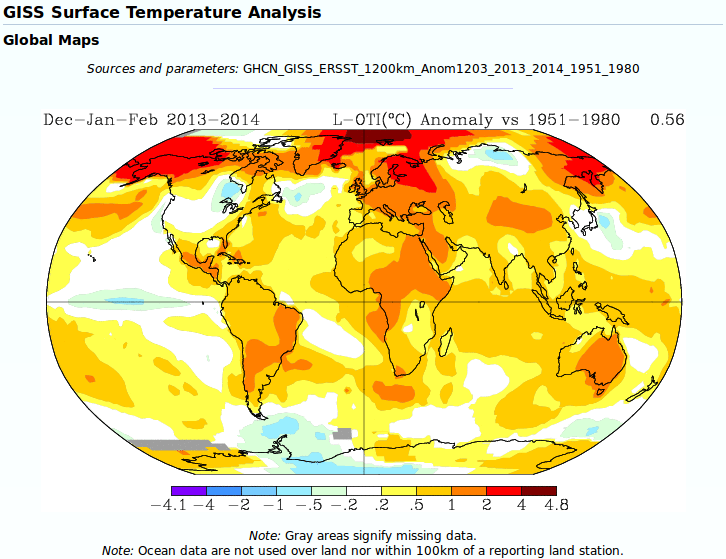 Many people in US perceived the winter 2013/14 as cold, because they have not been used any more to an average 20th century winter, due to the warming trend of the recent decades. The following figure shows the geographical distribution of the temperature anomaly for the average winter of the last 20 years compared to the average winter of the reference period 1951-1980: Now, how does the winter of the year 1911/1912, which was mentioned by Monckton as pretext to deny global warming, looks like in comparison? Here is the geographical distribution of the surface temperature anomaly, again relative to the average winter of the reference period 1951-1980: 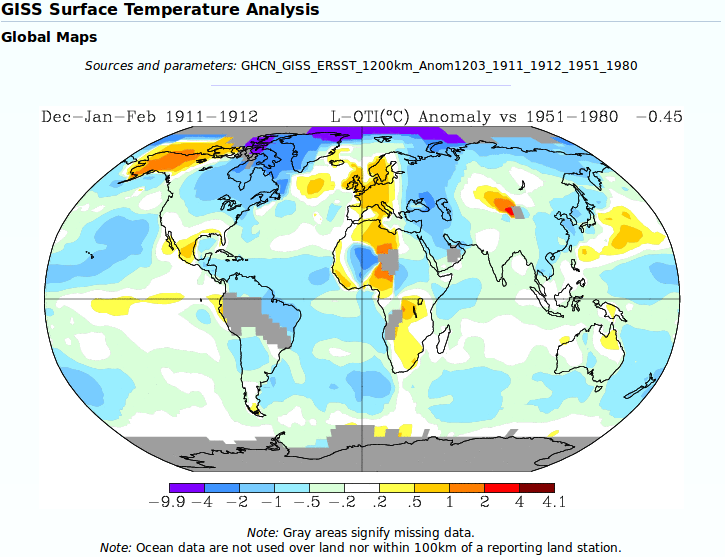 It looks very different to the winter 2013/2014. Whereas the winter surface temperatures 2013/2014 in United States were a regional cold anomaly within a generally warmer planet, the surface temperatures of winter 1911/1912 in United States do not stand out compared to the rest of the world. The anomaly is small relative to the reference period again, but large parts of the globe were colder during that winter than the average winter of the reference period. Thus it rather was relatively warmer in the United States than in many other parts of the planet, with respect to the magnitude of the anomaly. The globally averaged temperature anomaly relative to the average winter of 1951-1980 amounts to -0.45 deg. C.

Climate change is a change in the statistical properties of climate variables between different time periods, i.e., a change in the average of a variable (e.g., of temperature, precipitation, sea level, sea ice extend, etc.) or a change in other statistical moments (e.g., variance) of the variable over a time period, which should be sufficiently long. Data from only single years do not allow any conclusions whether climate has changed. This would be just weather, which can be quite variable from one year to the next. Therefore, I am going to show next how the average winter changed from the 29-year period 1881-1910 (it starts with winter 1881/1882 and ends with winter 1909/1910) to the 29-year period 1985-2014:

Here we have the global warming, denied by Monckton. The globally averaged increase in the winter surface temperature is 0.78 deg. C between the two 29-year periods. There has been a general surface temperature increase which is nearly global over the last century, with some regional exceptions. The magnitude of the temperature increase is not globally uniform. The Northern Hemisphere has warmed more than the Southern Hemisphere on average. There is an Arctic amplification, with the surface warming amounting to more than 4 deg. C in some Arctic regions. Land areas have warmed more than ocean areas on average. I have to mention a caveat here. The graphic presentation does not show, where the temperature change between the two time periods is statistically significant. There are likely some regions where it is not.

In short, any claims that the colder winter 2013/2014 in United States refuted global warming taken place over the last century are absolutely baseless.