Although much of the public focus regarding global warming is on the temperature increase near Earth's surface, the Arctic sea ice decrease, global glacier retreat or other phenomena at the surface, which are more visible to the human eye, from a point of view of physics, the heating up of the oceans is the most important factor regarding the changes in the energy balance of the Earth system. About 90% of the energy accumulation due to the perturbation in the radiative balance at the top of the atmosphere, caused by the increasing greenhouse gases in the atmosphere, is taking place in the oceans[1]. The importance of the oceans arises from their capability to store an enormous amount of heat due to the high specific heat capacity of water combined with the large mass of water in the oceans. To put things in perspective, the heat increase related to warming up only the upper most 3.5 meters of the global ocean body by x degrees is sufficient to warm up the whole mass of the atmosphere by about the same amount of x degrees.

Monitoring the oceans gives crucial information about the ongoing climate change in the Earth system. Following figure shows the global average of the annually averaged temperature anomaly in the oceans between the surface and three different depths, 0-100 meters, 0-700 meters, and 0-2000 meters over time, based on data provided by Ocean Climate Laboratory of the National Oceanic and Atmospheric Administration (NOAA). The figure includes the year 2013 as the most recent data point. The colored shadings show the standard error of the data times two. The black lines display local regression (Loess) fits with the 95% confidence intervals of the fits as grey shadings. The graphic was created using the package ggplot2[2] of the statistical computing and graphics environment R. 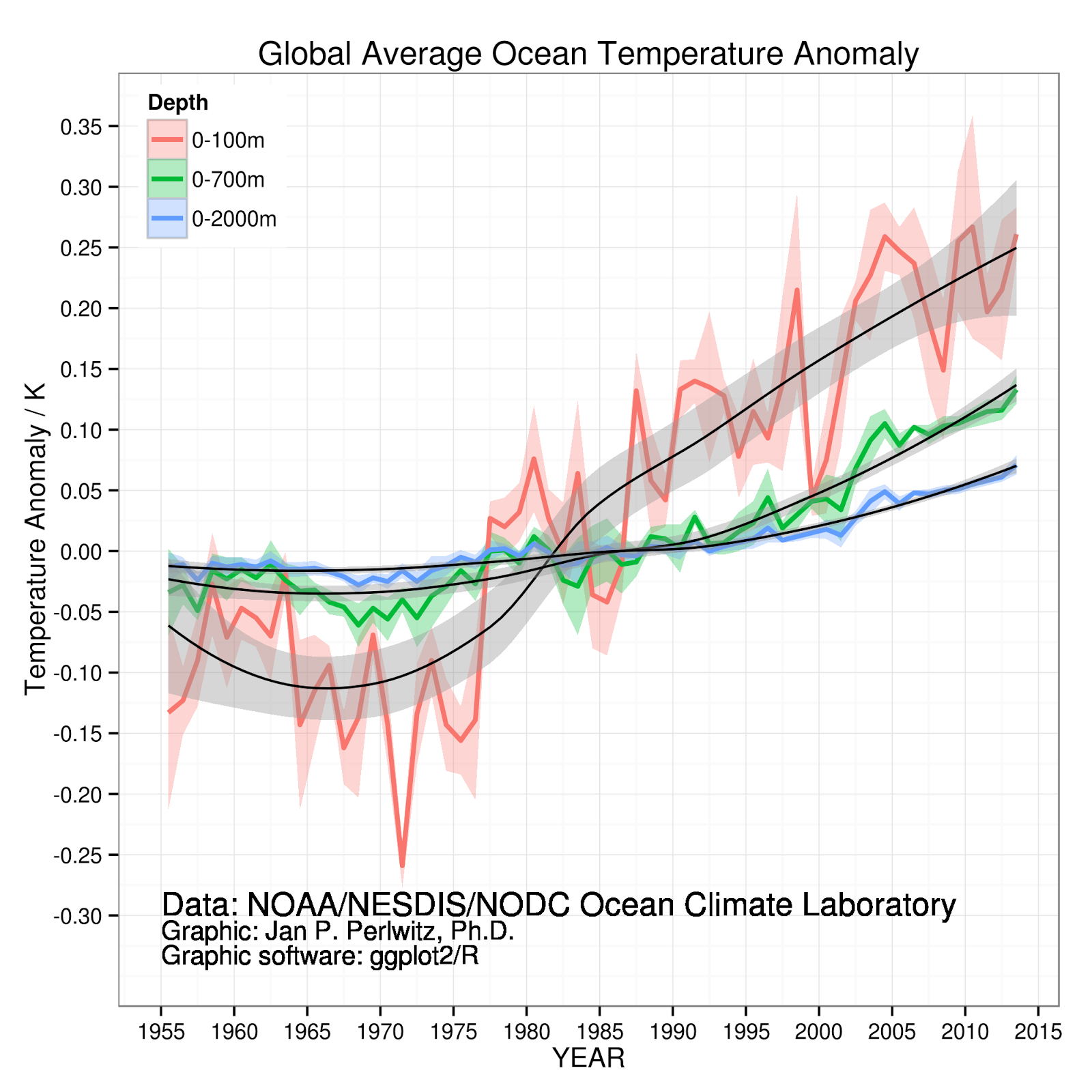 A few things can be see in the figure:

1. The temperature increase, which is visible in the oceans for the average over 100, 700, and 2000 meters depth since the mid 1970s is largest in the upper most 100 meters and becomes smaller with adding deeper layers to the averaging. The perturbation of the energy balance comes from the top and takes decades to penetrate into deeper layers of the oceans.

2. The temperature increase has been nearly linear for the average over the upper most 100 meters depth for the last decades, amounting to about 0.07 Kelvin per decade. To put things in perspective again, the same amount of heat related to this average temperature increase in those 100 meters would increase the average temperature of the whole atmospheric mass by about 2 Kelvin per decade. Luckily for humankind, most of this accumulated heat will not warm up the atmosphere, but penetrate into the deeper layers of the oceans. The exact amount of atmospheric warming in the next decades and centuries will depend on how efficiently heat accumulated in the upper layers of the oceans is being sequestered into the deeper layers of the oceans.

4. The globally averaged ocean temperature anomaly in the upper most 100 meters shows large interannual variability. The temperature swings can amount to about 0.2 Kelvin within a few years, for example between the years 1998 and 2004.

In recent years, the talk has been a lot about the fraction of the energy sequestered into the deep and abyssal layers of the oceans (the so called "missing heat"). In my opinion, there has been some misdirection in the talk about the consequences of this regarding global warming at the surface. The argument has been put forward that concerns about global warming were exaggerated, since the deep oceans interacted with the atmosphere only on long time scales and the heat sequestered into the deep oceans was not coming back to the surface. However, it should be clear from the above that the heat accumulated in the deep oceans is not needed for continuing global warming at the surface and of the lower atmosphere. There is plenty of accumulated heat around in the upper layers of the oceans, which interact with the atmosphere on much shorter time scales, particularly the layers of the oceans which are above the thermocline in the oceans. The amount of heat accumulated in the upper layers of the oceans is more than sufficient for global warming at the surface and in the troposphere to continue for the decades ahead. This heat accumulation has not stopped and it will not stop as long as the amount of greenhouse gases in the atmosphere is increasing unabated due to human activities.