The third time is the charm and the anti-science blog wattsupwiththat.com

Previously, I had reported here that I had been declared "persona non grata" on Anthony Watts' anti-science blog wattsupwiththat.com (WUWT). The story then developed with Anthony Watts posting a comment on the blog here to the previous posting on July 7, 2013, where he retracted the announcement previously made on his blog (here is a screenshot of the previous announcement once more), 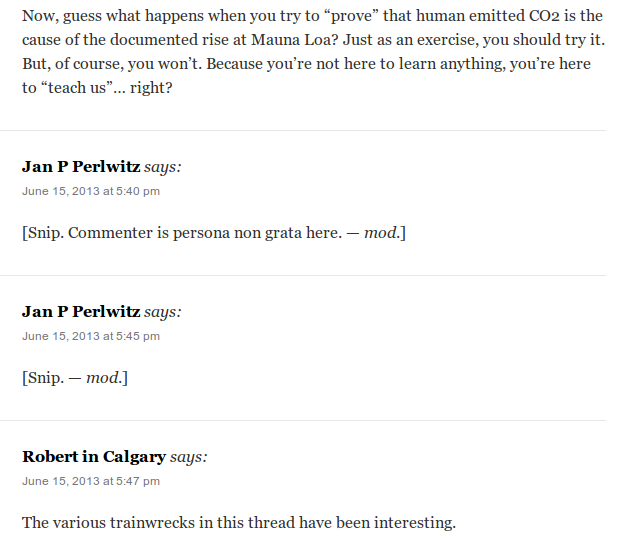 and where he also made a pathetic attempt to present it as if the banning had been only in my head. Later, he also publicly claimed that the statement about my banning were "unsubstantiated facts on display", despite the evidence above to the contrary. But he basically said I was allowed to comment again at WUWT.

So, I went back to WUWT. It lasted only as long.

I am usually trying to reply with polite words, even when faced with the most vicious and hateful attacks or with displays of extreme ignorance, although I may not have always been successful with my tries. However, I have some problems with diplomatic approaches. I rather tend to speak my mind, sometimes up to a fault, which can escalate situations, and it has caused me some troubles and scary moments in the past, e.g., in the country where I came from.

There have been several instances, when commenters on WUWT articulated their wish that violence was applied against climate scientists, including me as a person. For instance, the late Robert E. Phelan who even was a moderator at WUWT, wrote on April 14, 2012, addressed at me, "When the peasants come for you with their pitchforks and torches, you will have brought it on yourselves."

Yesterday (July 10, 2013), some other commenter, posting under the alias Allencic, from the anti-science crowd on WUWT articulated a similar wish, (combined with the delusional notion that the AGW deniers were in a situation like Jewish scientists in Nazi-Germany. The articulation of the wish for violence against climate scientists needs a strong rationalization to justify it), even though the commenter claimed later it just had been irony.

"God help us from these fools who claim to be climate scientists. When this finally blows up and the public realizes how badly they’ve been had you might want to invest in pitchforks and torches and tar and feathers." 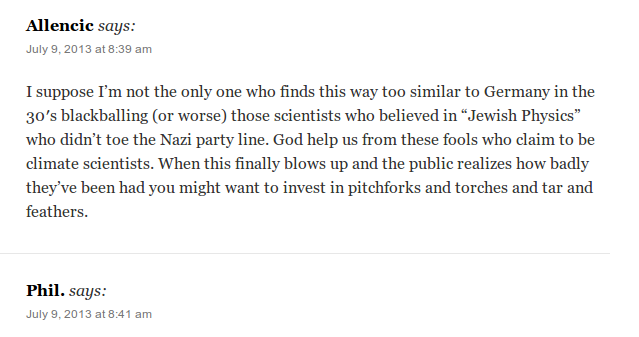 Anthony Watts is growing a quasi-religious anti-science cult with his blog. And he is not the only one who makes propaganda against the findings of climate science and against climate scientists, using a combination of disinformation, junk science, inciting accusations against scientists and outright lies. There are other anti-science blogs and groups who are publicly agitating (e.g., the Heartland Institute) in the same way. If Watts does not do it himself, he tolerates it when it comes from his guest authors or followers. Therefore, I consider it very possible that some AGW-denier fanatics are going to use violence against climate scientists and scientific institutions, equally motivated, for instance, as religious fanatics are attacking abortion clinics. The grounds are laid. The hate is there, the viciousness is there.

I am a peaceful person, but I am not a pacifist. I am in favor of the right to self-defense, including armed one, if someone tries to apply violence against climate scientists (or any other innocent people). I articulated this on Watts' blog, although not as elaborated and with different words. Now, I am banned again. Permanently.